Have you ever imagined what it would be like to soar amongst the clouds like an eagle? Swing through the trees like a monkey? Leap amongst the ocean waves like a dolphin? What if you could do all of those things in one single character?

Well you're in luck! With the Overgrown TTRPG you can be that dolphin-eagle-monkey! Or an octopus-dog-wasp. Or hippo-koala-snake. What are your favourite 3 animals? Merge them into one creature and play as them!

Overgrown is a rules-lite naturepunk TTRPG in which you create and play as rapidly evolving hybrids of literally any animal you can think of. Roam a far-future world where nature has fought back against humanity AND WON. Explore a jungle covered planet, trek vast continent stretching forests and delve into the dank swamplands where a dark element is arising to threaten life itself.

This all-ages game is a work of collaborative fiction between the players and game-runner, where you build up communities and locations together and craft your own unique story. The intuitive system allows you to have a character made in minutes and to fully understand how to play within that very first session. Just roll a 20 sided die for whatever action you wish to take and add modifiers for each animal feature you can justify using at the time. Check out the fun random character generator @BasiliskOnline made for the game here: https://basiliskonline.itch.io/overgrown-character-generator

There are some small extra mechanics on top of that, including assists, prep, and opposed actions but the fun really begins with crits: every natural 20 on the die unlocks a new animal feature relevant to the roll, whether suddenly gaining claws to climb with or gills to breathe underwater or a shell to defend against those darn gorilla-rhino-bees!

Here you can see a playthrough of a special Halloween one-shot of Overgrown, played for a U-rated stream, giving a perfect example of how the game could be played for all ages and still be family friendly:

For a more grown-up version of this same scenario, you can see the alternate stream over at: https://www.twitch.tv/videos/1189497421

Or for another grown-up stream of a different sample scenario go here: https://www.twitch.tv/videos/1408987205

For more info, regular updates and general chat, please find me over on Twitter @bennewbon

"Overgrown’s mechanics are extremely well put together.
They are very easy to pick up, but verbose enough to allow for a
fantastic range of actions. Your imagination is the only limit! One
of the best parts of Overgrown is the variety. You can do anything
you can imagine with practically any combination of animals. The
best part of Overgrown, for me, is the disability accessible options!
Ben has really come through for those of us with sight and vision
problems. Once you have this much variety and excitement, it’s
hard to go back to a more complex but less versatile system."

"I got into a swordfight with a gopher while
we both leapt through the sea like dolphins.
I was a bear and a bee. 10/10"

In order to download this game you must purchase it at or above the minimum price of $20 USD. You will get access to the following files:

Support this game at or above a special price point to receive something exclusive.

Get the existing rulebook and the fully fleshed out gamebook (digital only).

I realise not everyone can afford to contribute to a crowdfund but I still want anyone to be able to get and play this game, so if you can't spend $20 just now, that's alright; please feel free to grab a community copy and leave a rating or comment to help boost the game at no cost to yourself. I'll add an extra community copy for every paid purchase and/or rating, so hopefully this will keep topped up :)

This isn't even my final form!

I don't have an extensive review of this game but it's certainly creative.  It's something of a simplified RPG system, which in combination with the semi-cartoonish subject matter makes it ideal for younger players.  My biggest criticism would be less with the rules themselves and more with the layout of the book; stuff just kind of is wherever it is, not being really organized at all, and that can make it difficult to look up specific rules at any given time, or require a lot of scrolling.

Don't get me wrong here.  The document is short and the rules are simple, so this isn't a huge deal, but it merits mentioning.  The unusual subject matter and limitless potential of this system definitely make it one heck of a sandbox to play in.

Thanks for this :) it’s rare to get proper feedback, so really appreciate that. Layout is certainly something I struggled with but hopefully this is a little bit helped by the rules reference included with the character sheet. Next project I hope to be able to afford a proper layout person!

My full review on the TTRPGkids blog is linked below, but the short version is... I played Overgrown with my kid and had a blast!  You should definitely try it out and support a cool new all-ages friendly game!

Thanks so much for this. An absolutely wonderful review and so lovely to hear your kiddo had so much fun with it :) 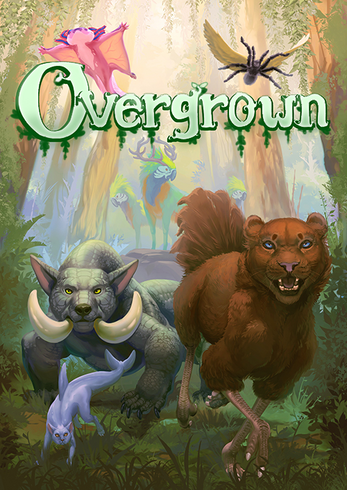